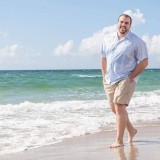 Daniel is a writer in recovery and also an outreach coordinator at Stodzy Internet Marketing. He likes to share his story to show that absolutely anyone can get sober provided they are ready to take action.

My father had a hard life. When he was 15 he lost his mother to a heart attack. One year later his dad remarried and the step mom kicked my father out of the house. He was on his own at the ripe age of 16. I never met my dad’s dad, I met his brother once and he was nice but there was a total disconnect from his side of the family. I open up with this because my father had no business being a father to kids let alone being a good one. He was in fact a great one, it seems he made sure to never be like his father and if he had kids, he wanted to be there for his kids and support them in every way. My dad was my baseball coach growing up, he took me to plenty of pro sports games, we went fishing, we did a lot of things a son and father should do. He was my rock, I was wired just like him so we had a special kind of connection. On March 17th, 2015 I lost my dad, he had a heart attack at 60.

I was in bad shape in 2015. I was hooked on drugs and estranged from my family. About six months prior I was working for my dad and got let go for several things I did wrong. It broke my father’s heart. He gave me every chance possible and I blew it. I went those six months without speaking to him until about three days before he passed away, I reached out and we had a very deep talk. I will forever be grateful we talked that day. If we didn’t I think my grieving would of been much worse. My mom was the one who called me that morning on March 17th. I was renting a room in South Florida at the time, more isolated from the world than I had ever been. I’m sure if my mom had the option she wouldn’t have me come up to the service but what could she do? I went to the service and it was too surreal, there was my dad in an open casket and I was so high I couldn’t even feel anything I should of been feeling. I spent the next two months crying myself to sleep every night, I was living in a nightmare.

After those two months I was given an opportunity to get help again at a treatment center, I was so beaten down and worn out I said yes right away and was very grateful for the chance.To say I was hopeless was an understatement. going away to treatment was my only chance to regain hope. I felt without guidance from my father and not having him to root me on, it was impossible for me to get my life together. My dad had spent so much time teaching me the simple morals and values that he lived by and made him successful and I had failed him immensely upon his passing.

I remember digging down deep to really reflect on what could motivate me to continue on and get my life in order. That’s when it hit me like a thunderbolt, I had to honor my dad. Honor what he raised me to be and how he taught me to act, he had spent so much of his life trying to guide me that if I never got it together that would render his time spent on me useless. I wasn’t going to let that happen. While dealing with my drug addiction, I also prepared to live a life of integrity that I was always raised to do. Things like working hard, being honest, being loyal and helping out others. These were very simple principles my dad had lived by and tried his absolute best to pass on to me

My first year sober was so special to me. I spent all of it building a new life and proving to myself that I can be what my father always knew I could be. When I had moments where I was at a crossroads, I could hear his voice ringing in my head, the voice was loud and clear because I always knew what he would say about situations. It’s something that reigns true to this day. It has been four years now since he has passed, I miss him more than ever but there is unquestionably a piece of him that is always with me. The connection I have with him is so strong that it feels like he is still here. I hope someday I can be at least half the man he was.