There’s this false assumption about artists that he or she always has this creative thought floating around in their head day and night. In reality, most of the time it can be a desperate journey to find anything original to put on paper. Creators block can be a harsh thing that visits any great artist. However, like some predicaments, there is a cure. I believe running out of ideas is the underlying issue when it comes to any creative process for many artists.

As I was once told, an artist should think more like the scientist. Being an artist is not about wearing a beret, enjoying wine, and being consumed by their creative work while the birds sing. If anything, an artist should learn good experimentation and research. This often happens in the sketchbook. Log after log of creations no one sees. Think of your mind like a creative bank. If you do not make a daily deposit you will eventually run out of creativity. From the moment I realized art was something I must be called to do, I began to draw like a mad man. This has resulted in piles of used sketchbooks over the years. A majority of the time sketching resulted in many bad ideas but also very good ideas but the most important thing was that I never stopped experimenting.

Another dilemma can be a shortage of interesting things to draw; at least we think we’ve run out of things to draw. When in doubt just start drawing.  Paul Klee puts it simply as an act of “taking a line for a walk.”  Sometimes there doesn’t need to be a reason behind why you draw. Just draw. Birds don’t think about what they’re going to sing. They just do it. We can figure out the reason later. Over time when we learn to grab hold of this exercise of journaling away sketches and ideas we struggle less with trying to find an original thought. I’m not saying creators block goes away entirely but it no longer renders you helpless in the moment of any project.

The first job I had getting paid on a consistent basis as an artist was working for my college newspaper. I was hired as their cartoonist and I would illustrate at least 2-3 cartoons per issue. I’ve lost count of how many times I turned to my sketchbooks of ideas that I had logged away when I couldn’t seem to find an idea for a cartoon. People often ask what my secret is to finding an idea. I don’t think it’s a secret at all but rather a discipline of sketching daily. Athletes need time to exercise to stay fit and an artist must do the same in his or her craft. It becomes evident when I haven’t been sketching much. My work becomes very rusty.

Another odd question I get asked is “how long have you been drawing” which I could never really respond appropriately. Shaun Tan gives a great answer to this question and understanding to human nature; “when did you stop drawing?” Every child instinctively draws. You put a box of crayons in front of them and they can’t help but draw something. I believe every artist was a child who never stopped drawing. In a way, we are adults desperately trying to return to that childlike state of imagination. For any young creative out there I would encourage to stay the course. Find someone who is winning and copy what they are doing and most importantly, never stop drawing. 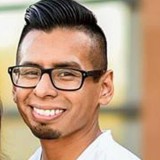 Sebastian Martin is an Illustrator/Caricaturist located in Arizona. I work full time as an artist creating work for clients from Graphic Design to Editorial Illustration. I am also the owner of ColorBox Entertainment going around the valley drawing live Retail Caricature. To find more of my work follow me on Instagram at sebastian_martin88