Are you hoping to raise financially stable kids? Have you thought about the process moving forward? If not, you should. That’s because encouraging kids to have a positive attitude about money early on can have a lasting effect on their spending habits as they mature and grow older. Continuing to praise good financial behavior while offering advice along the way will also help them become more responsible and teach them about financial independence.

So, without further ado, here are some simple ways to engrave positive spending habits and financial responsibility into your child’s daily routine that will get them started on the right path towards financial success.

Be Honest About Your Financial Past: The vast majority of parents at some point in time has had their fair share of bad spending habits – whether they ran up their credit card bill or bounced a check (or two). Whatever you do, resist the urge to come clean about everything you did wrong with your finances. Remember: you’re talking to your child, not a financial advisor.

But what if you’re answering questions?

Well, if you’re answering questions directly, pick and choose which financial sins you’ll shed light on without putting yourself in a bad position. Stories of taking everything out of your savings account to travel with an ex or blowing through your 401(K) account because you didn’t plan on buying a house are suitable tales to share – as long as you learned from your mistakes. That’s because these are situations that can take months – if not years – to overcome.

Introduce Them to Money Early On: Once your child is old enough to count, include simple economics into their daily routines. When you’re in the grocery store, for example, explain to them why it’s better to choose the vegetables that cost less per pound or why you chose the generic package over the name-brand one. Don’t forget to explain to them that by saving $20 on this grocery trip – through loyalty discounts and coupons – the family will have an extra $1,000 at the end of the year to spend on something fun like a vacation or a birthday party. That way, they too will start paying attention to the environment around them and most importantly, value the efforts you’ve made from a financial point of view.

Encourage Them to Manage Their Own Money: Did you know that getting an allowance can be a good way for children to learn about having money? In fact, experts believe that allowing your child to manage their own money helps them better understand its value and learn the difference between wants versus needs. That’s why it’s important for parents to provide opportunities for their child to earn money by doing extra chores around the house – like yard work – or push them to search for a part-time job once they’re old enough. In doing so, they’ll realize that hard work pays off.

As your child grows older and becomes more mature, make sure you teach them about the three-bucket approach or the three portfolios that consist of the traditional mutual funds. That said, help them open a checking account and don’t forget about the savings either. Not only does it serve as a great motivator, it’s also the best place to put your cash savings. After all, savings accounts have lower interest rates – a topic you can cover with your child later on when they’re ready.

Teach Them About Budgeting Basics: Speaking of budgeting basics, teaching your child about saving, spending, and sharing – the three-bucket approach – can help tremendously. For younger children, try using a clear jar so they can watch their money grow over time – and see it disappear when they withdraw from it to make purchases.

Thanks for the read! Did I miss anything important? What are some other ways parents can teach their children about money-saving tips? Feel free to leave a comment below. 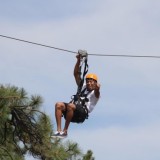 H. Davis is passionate about K-12 education and loves exploring different ways to make learning a fun experience for everyone involved. If you can’t catch him in the classroom, you might be able to find him at the gym, or watching football (Go Broncos!). Follow him on Twitter at @Davis241.