I must have been about 9-years old when I got my first “sobering” opportunity to seek someone’s forgiveness…publicly.

There was a particular classmate of mine that had the unusual ability to find, expose, and torture my very last nerve.

Because he was smaller than I was, he would traditionally run to a teacher after he had succeeded in riling me up. I suppose it was just his way of surviving. 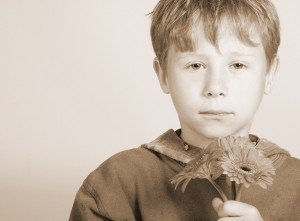 So a couple of months of this had gone by until he made a frightful mistake.

After spouting off about who knows what, a lapse in judgment made him assume that his size meant that his reflexes were superior to mine (this is a perfect place for an evil laugh by the way…in case you felt the need).

As he left fleeing, I transformed at lightning speed.

With precision and brute force, much like that of a Gladiator, I kicked his back foot across his front leg and shoved him with all of the force I could muster.

As you can imagine, the combination of his motion and my added assistance did not work in his favor.

Like a head-first long-jumper, he flew through the air and landed in a pile on the concrete.

As the cries began to rise up, I just stood there in shock. However, my amazement at what happened began to turn in to fear when I realized that a teacher was standing nearby.

Of course, she didn’t witness the behavior that lead up to my outburst…not that it would have mattered.

Understandably, after a detention and a call home, I found myself apologizing to the “poor little thing” in front of both our parents.

But, as humiliating as it was, I learned something really important about forgiveness that day.

As I extended a sincere apology, I was forced to admit that my actions were dangerously wrong.

I still remember their faces softening as I sniffled my way through the right words.

In fact, I remember his mom saying:

“I know my son isn’t completely innocent in this, but it means a lot to us to hear that you understand how your actions were wrong as well.”

Now that I’m a parent, that experience has caused me to be relentless in coaching my kids towards genuine forgiveness as well.

As kids begin to understand the severity of their actions, it’s amazing to see how well they grasp the necessity of pleading for forgiveness. And conversely, it’s equally amazing how quickly they begin to extend forgiveness when they’ve been hurt themselves.

In our home we surround our kids with scriptural reasoning as to why forgiveness is so important. With the message of the gospel being a central theme, it’s pretty easy to talk through the “why” that lies behind our instruction.

I challenge you to pick up a bible and read through The Gospel‘s. If you come out on the other side without an appreciation of true humility…you need to fire up that defibrillator!

Turn the Tables on Them

What works best for your kids…telling them something or showing them?

In most cases I would venture to guess that your example is more potent than your words.

If you haven’t already tried it, the next time you find yourself having acted like a schmuck to your kids, go and ask them for their forgiveness.

If it’s the first time, and if you aren’t just paying them lip service, watch as their eyes tear up and their hearts melt.

Combined with a little explanation of why you’re apologizing, I’m convinced that this single act is one of the most powerful tools we have as parents.

In fact, you might think about trying this same thing with your wife. Letting your kids see this kind of interaction lays some serious groundwork for their future relationships as well.

What are your thoughts on this?

Have you experienced something similar? Maybe something drastically different?

Maybe you’ve employed a different tactic to teach forgiveness to your kids?

Maybe you’ve found it extremely difficult to give or receive forgiveness?

Regardless of your experience, become part of the dialog! Your comments are always welcome!